The Blazers failed to keep their lead in a tough match

The Blair girls' varsity basketball team (1-1) lost to the Clarksburg Coyotes (1-1) with a score of 45-56 on Tuesday night. The match, which held a close score throughout the game, ended with Clarksburg pulling ahead in the second half and winning the game.

The game was off to a quick start, with the Coyotes scoring a two-pointer a little over a minute into the first quarter. Sophomore guard Kate Hildebrandt caught the ball off a rebound and scored, evening the score to 2-2. Efficient passes and good communication by Clarksburg helped them maintain possession of the ball as they scored another basket just seconds later. 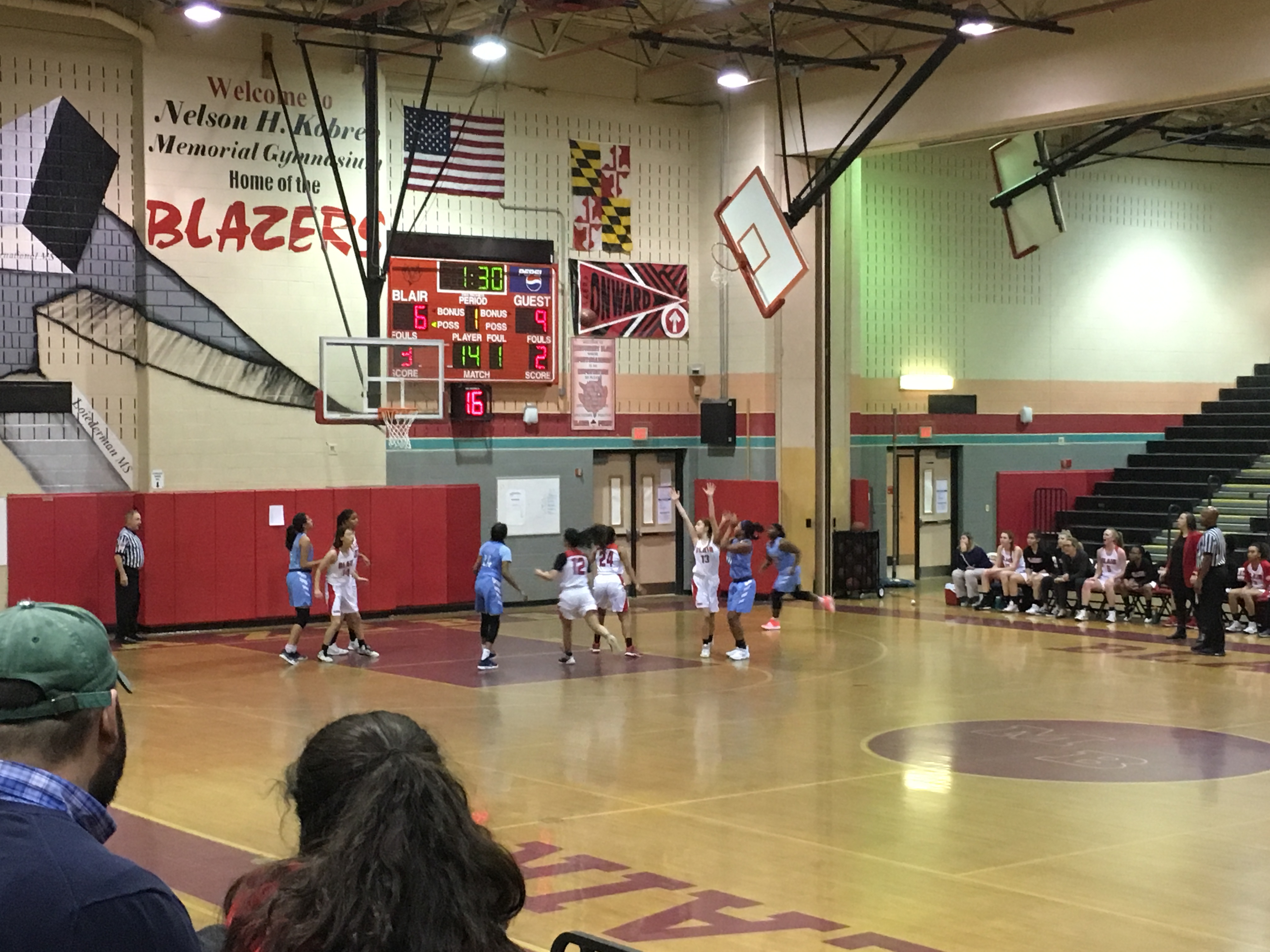 After the ball was knocked out of bounds by the Coyotes, Blair gained possession yet again. Hildebrandt attempted to score again, but the ball was forced wide, helping the Coyotes score another two-pointer off the rebound. Halfway through the quarter, coach Amy Ferguson called a time-out to discuss offensive strategies with the team.

When the quarter resumed, a traveling violation by Clarksburg gave Blair the ball. Freshman point guard Emily Liu narrowly missed a three-pointer, and the Coyotes gained possession of the ball again. With a long pass leaving the court wide open, the Coyotes were able to score another two points, widening their lead to 2-8.

On the Coyotes' side of the court, the Blazers fought to regain control of the ball. A foul by Blair gave the Coyotes two free throws, both of which were missed. Junior guard Zoe Abramson then drove the ball back down the court and scored the second two-pointer for Blair. Another foul by Blair gave Clarksburg two more free throws. This time, the second one went in, leaving the Blazers down 4-9. The Blazers worked together to fight back with Liu capitalizing with the ball and scoring. Soon after, smooth passing between senior captain Megan Burke, Liu and Abramson ended with Abramson scoring another two-pointer to finish the first quarter down 8-9.

Blair came back with a vengeance during the second quarter.

When the Blazers matched the Coyotes goal for goal, sophomore Peyton Martin scored twice, leaving Blair on top for the first time in the game with a score of 18-15. Although the Blazers' lead was narrowed to 20-19 following two goals by the Coyotes, Liu soon scored the first three-pointer of the game, bringing the Blazers back up 23-19. Another three-pointer by Liu and a successful free throw by Burke left the score at 27-20. With 30 seconds left in the first half, Clarksburg scored another two-pointer. Tight guarding by the Coyotes prevented Blair from capitalizing on the remaining time, leaving the score as 27-22 at the end of the first half. "We played a great second quarter; the intensity and momentum was super high," Ferguson commented.

The third quarter signaled the beginning of the end for the Blazers. Junior forward Adia Keene, who successfully made two free throws, was unable to balance out the Coyotes' next two goals. After a close shot by Hildebrandt, Clarksburg quickly drove the ball down the wide open court and scored, shrinking Blair's once-wide lead to 29-28.

However, Blair was not going down without a fight. After Clarksburg threw the ball out of bounds, Blair regained control the ball and Peyton Martin scored twice. While the court was left open, Liu scored an additional two points. She successfully made a free throw, increasing Blair's lead to 36-30. Unfortunately, the Blazers were unable to keep the Coyotes at bay. Clarksburg soon scored a three-pointer and another four two-pointers, taking back their lead with a score of 36-41.

Blair only fell further behind during the fourth quarter as their shots kept going too wide. The Blazer defense was also unable to keep the ball out of the Coyotes' possession, letting in three goals in a row. With six minutes left to the game, Hildebrandt and Keene scored a two-pointer apiece left, but the Blazers were still down 40-49.

As the end of the game drew closer, both teams committed more and more fouls. Peyton Martin scored three more free throws, but failed to overcome Clarksburg, who scored another two-pointer to leave the score 43-51. In the last two minutes, the Coyotes began to stall the Blazers, who set up many shots but failed to score.

Three successful free throws and a goal by Abramson later, the score was 45-54. Finally, in the last seven seconds, a foul by Liu gave the Coyotes two more points from free throws, ending the game with a final score of 45-56.

The Blazers' inability to hold back the Coyotes is a key focus of improvement for the team before their next game. "We're going to continue concentrating our intensity on defense. We're learning from the other team and our losses and improving," Ferguson said.

The Blazers will play their next home game on Thursday, January 3rd against the Northwood Gladiators at 7:15 p.m.

Emmy Song. Hi! I'm Emmy and I'm a senior at Blair. When I'm not working on SCO, I can be found solving math problems, curating Spotify playlists, or watching the sun set. More »