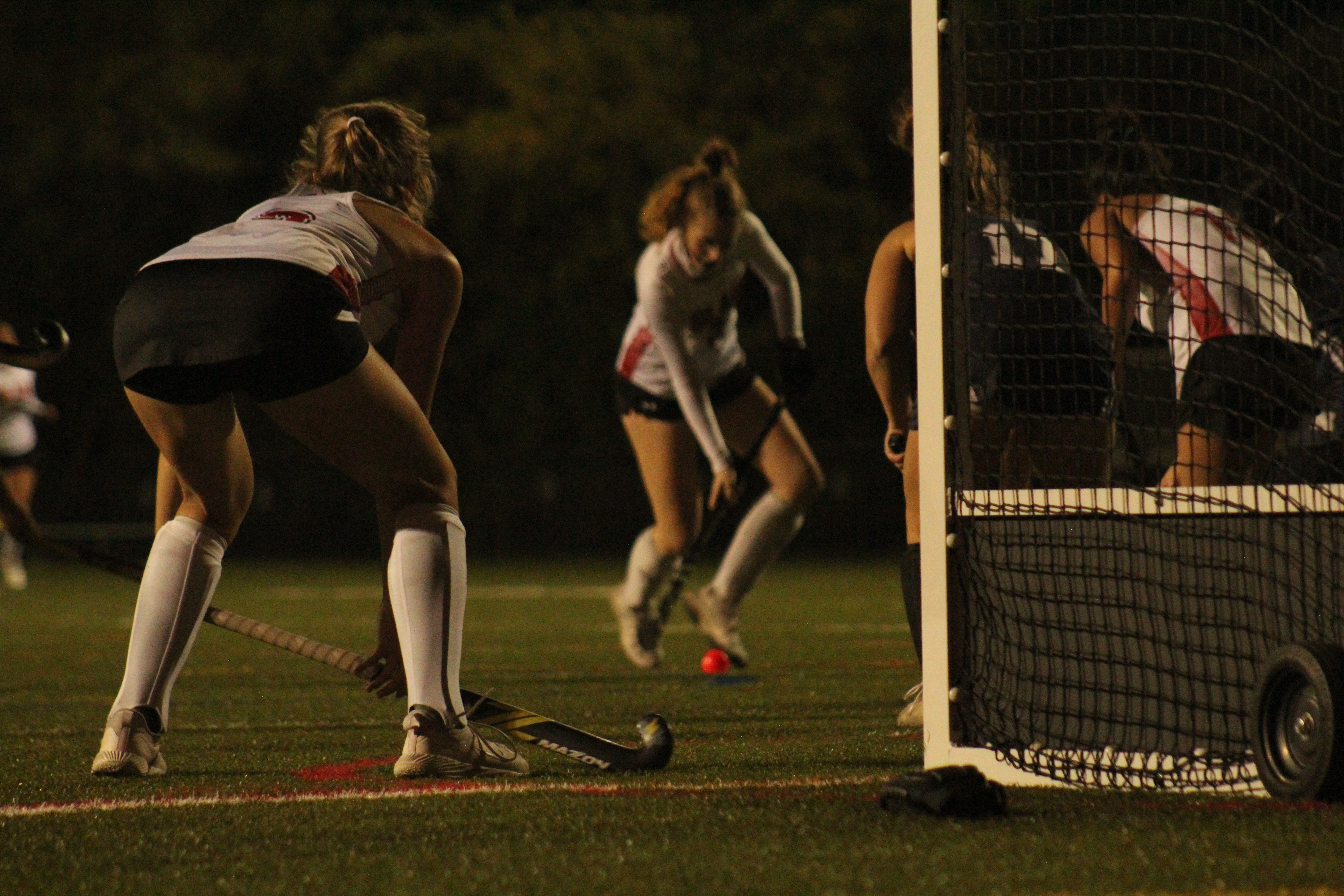 Blair inches away from a triumphant goal

Photo: Blair inches away from a triumphant goal

Photo: Blair inches away from a triumphant goal Photo courtesy of Henry Reichle.

On Oct. 20, the Blair Blazers (9-3) claimed a 6-0 blowout against the Magruder Colonels (7-5) to cap off a sentimental senior night. Despite the Colonels’ persistence, Blair’s offense took complete control of the match and showed off the strength of the team’s seniors in front of a packed crowd.

The game started off with a bang. Shooting towards the Colonels’ goal in the first few seconds, Blazers immediately went on the offensive as they swept the ball across to the other side. Only a minute and twenty seconds into the game, sophomore forward Carmella Beach scored the first goal of the game.

Blair continued to apply pressure on Magruder. A minute later, they earned a penalty corner on Magruder’s goal. Soon afterwards, with eleven minutes left on the clock, senior captain Eleanor Moose scored a second goal for Blair. The quarter ended with a score of 2-0.

Blair came back into the second with the same tenacity. Within the first thirty seconds, senior captain Delia Chen shot at the Magruder goal. Although it didn’t go in, the Blazers kept up this intensity.

Less than five minutes into the quarter, senior forward H.R. Moore scored a third goal, assisted by sophomore forward AnhTam Pham. Back to back penalties on the Magruder goal meant that the other team never even had a chance at offense. The second quarter ended with a score of 3-0. 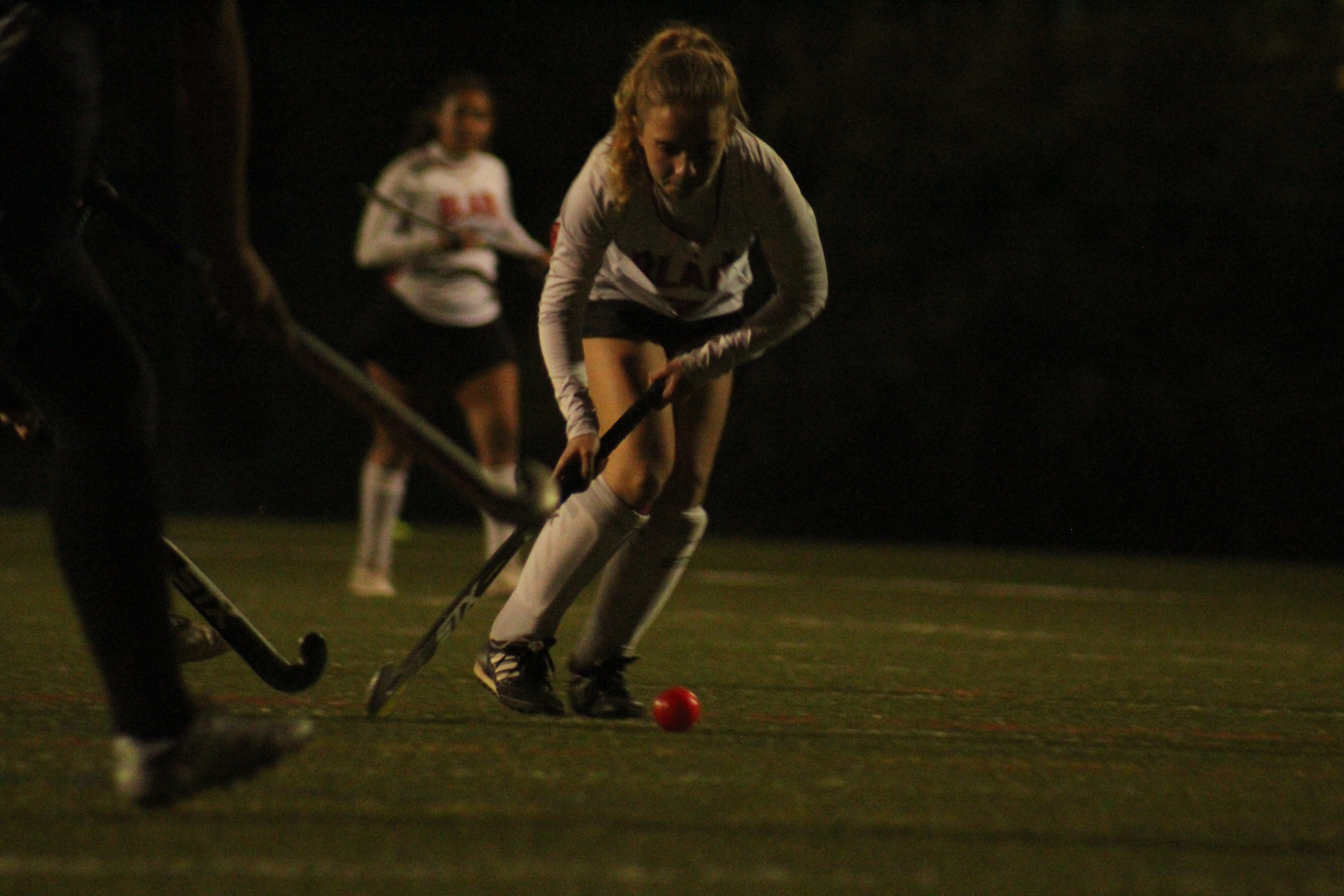 The Blazers advancing with the ball

Photo: The Blazers advancing with the ball

Photo: The Blazers advancing with the ball Photo courtesy of Henry Reichle.

By the second half, the Blazers were completely in sync. Stellar teamwork allowed Blair to push against the Colonels at the get go, earning a penalty corner merely a minute in. Moments later, senior captain Eleanor Moose stormed into the circle, completely overpowering Magruder’s defense before sweeping the ball in the net.

Coach Tami Spire reflected on that point in the game. “[We] were playing Blair hockey. You can hear us [saying that] a lot by the sidelines: ‘we want to play smart, clean, Blair field hockey.’”

Even with the four point lead, Blair didn’t go easy on the Colonels. Blair was piling on corner after corner at Magruder’s goal, while Magruder remained stagnant. With a swift hit, Moore shot the ball into the net with five minutes left to spare. The Colonels were restless but still couldn’t get past midfield – the ball was always on their side. With two last pushes from Blair before the buzzer went off, Blair was up by five points. 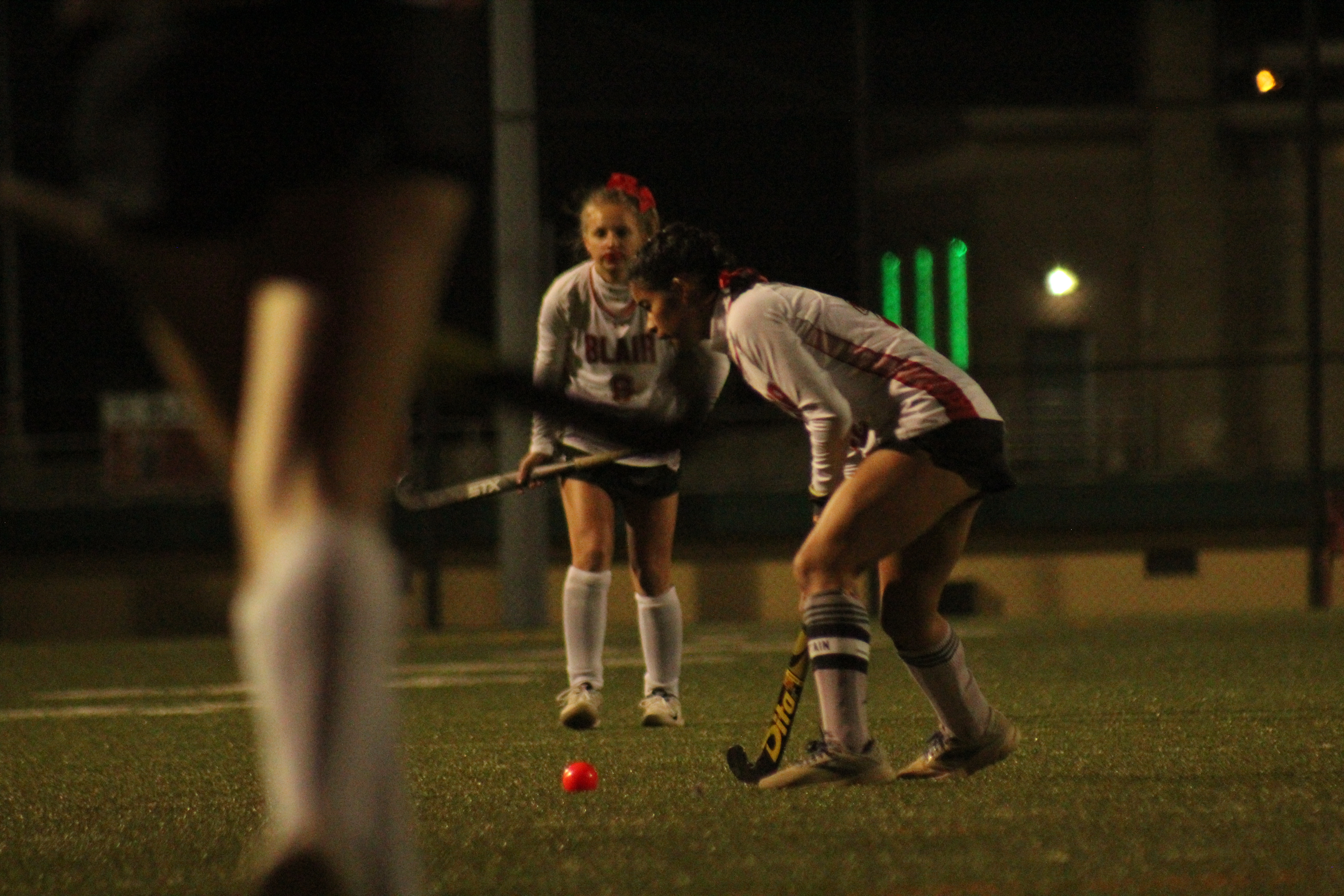 Blair slowing down the pace

Photo: Blair slowing down the pace

The last quarter was just as powerful. With the Colonels suffering from a penalty corner a minute and half in, Blazers coordinated to keep up their score. With eight minutes left on the clock, Chen swept the ball into the goal for a sixth point on Blair’s side. The rest of the game saw the Blazers keeping up their unrelenting pressure on the other team. The game ended with a score of 6-0.

That was the last game of the season, but Blair’s field hockey isn’t done yet. The team is proceeding to the playoffs, to compete against even bigger fish.

Both Dougherty and Spire remarked on seeing how the team progressed. “I’m looking forward to improving our game, because we’ve played some of these teams already,” Dougherty said, “And we’re ready to play better.”

“I’m really excited to have seen how our season went this year, and to see how far we’re gonna go,” Spire said. “Hopefully we can go even farther than we went last year.”

The playoff schedule has yet to be announced.