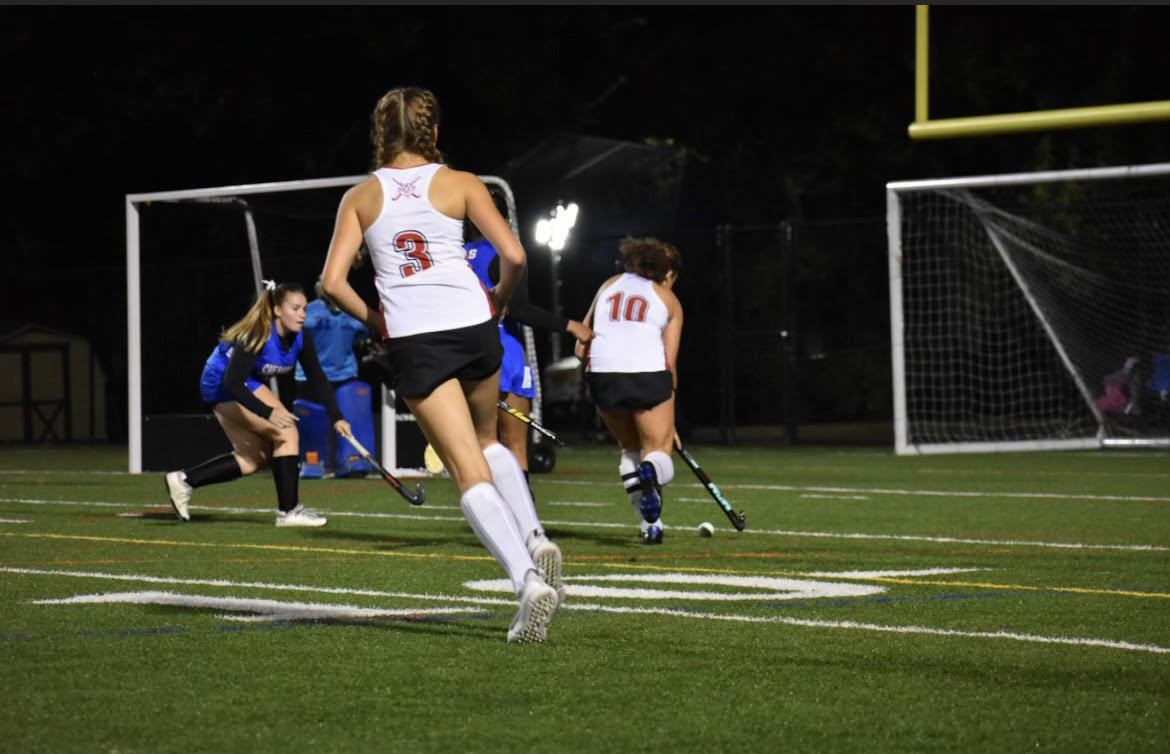 On Oct. 11, the Blazers (6-2) dominated the Warriors (2-5) in a thrilling blowout victory. Clean passes and excellent communication allowed Blair to take control and seal another win.

The game started out calmly. Blair swept the ball towards the Sherwood goal, but had to concede land seconds later. A balanced, even match, little action happened until the Blazers earned a penalty corner at 11 minutes. There, senior captain Eleanor Moose was able to secure the first point for the Blazers.

In the second quarter, both teams picked up the pace. A close skirmish by the Sherwood goal led hope towards a score in the first five minutes, but the ref’s whistle signaled otherwise. Pressure on the Warriors continued, several shots barely missing the goal, but their defense held up.

With three minutes left on the clock, senior captain Delia Chen led a push towards the goal, running at least a quarter of the field; with two minutes remaining, a penalty corner was called on the other team; and with a minute and 45 seconds left, junior forward Ayli Stoebenau scored Blair’s second goal. The first half ended with a score of 2-0.

Stoebenau did not score the goal unassisted. Junior defender Laila Burege passed her the ball, and the entire team maneuvered for the goal. This type of teamwork was consistent throughout the game: When senior forward Hailey Rose “H.R.” Moore was asked to describe what they did well, she said, “We connected a lot today, our talking ensured that we had really good passes all the way across the field, and we had a lot of good transfers 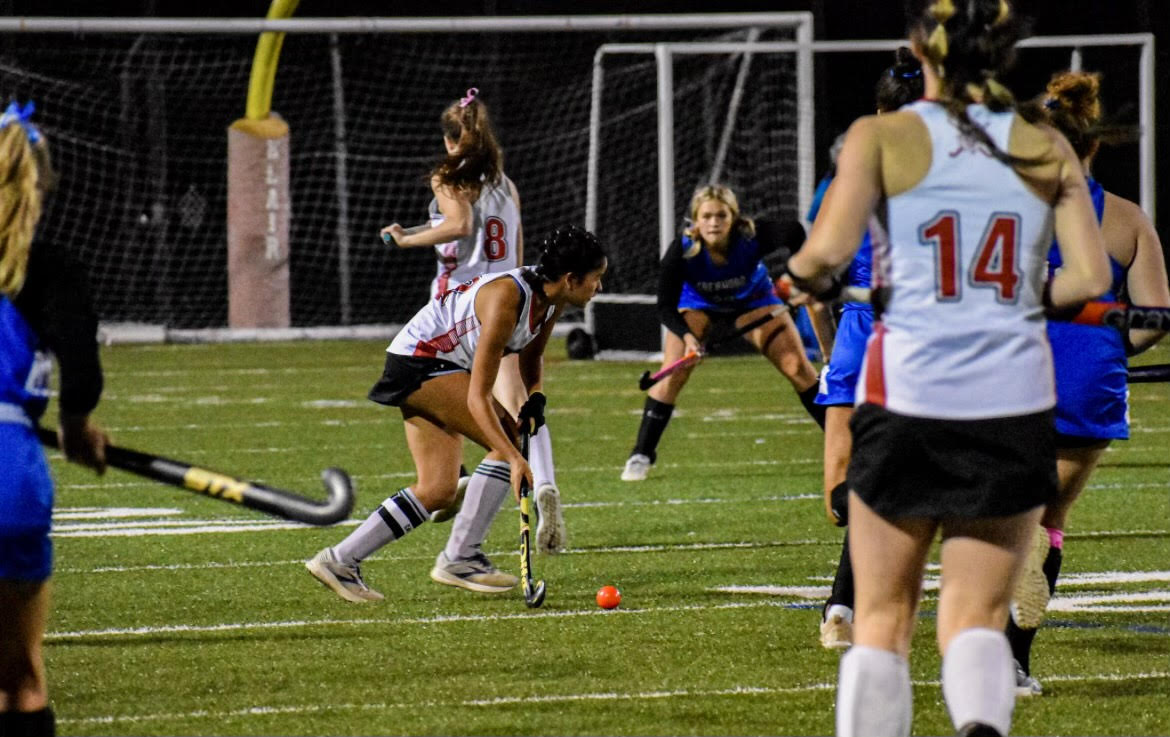 The turf was ripe with opportunities for the Blazers in the third quarter. Within four minutes, Blair snatched two penalty corners and made several advances towards the goal. Sherwood was getting antsy; their chance finally came when one Warrior came in on a breakaway, speeding past the Blazers towards the goal. Sophomore goalkeeper Keelin Pegg was prepared, however. Her eyes were locked on the opponent and she cleared the ball before Sherwood got in an attempt.

With five minutes left on the clock, the Blazers earned another pair of penalty corners. Chen lined up a shot towards the goal but a Sherwood defender swooped in to block it. Later, Moose and Chen both made noteworthy attempts, but the Warriors were quick on their feet. In the final two minutes of the quarter, the Blazers broke into the striking circle and grabbed another corner. The ball was inserted to Burege; Moose shot the ball between Sherwood’s defense, securing another point in the bag and ending the quarter with a score of 3-0. 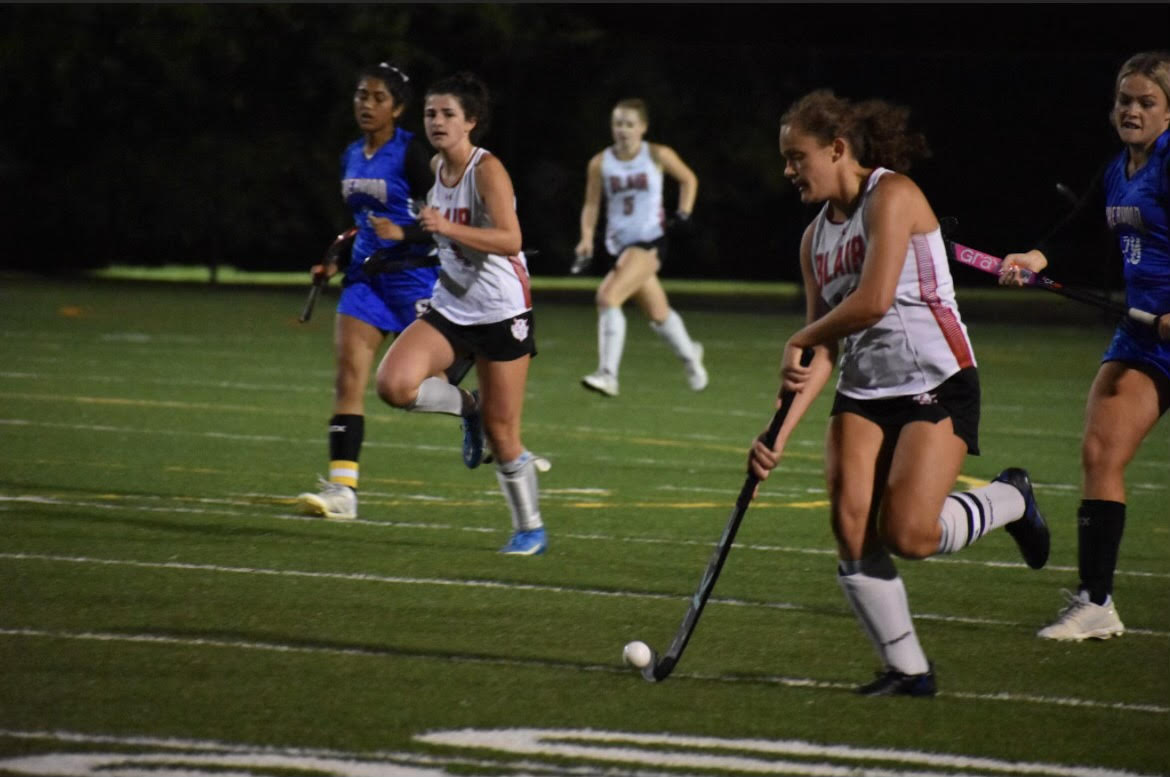 In the final quarter, the Blazers were pumped. Sherwood’s offense was getting sloppy, while Blair was just getting started. Blair continued to earn penalty corners – even if they weren’t able to connect, the difference in stamina was obvious. With eight minutes left in the match, Chen wove into the striking circle and scored. Possession barely turned over to Sherwood, despite their many attempts. In the last thirty seconds, Blair earned a final rush of momentum. Delia drove the ball towards the goal, until Moose finally swept a clean shot into the goal. Moose’s goal sealed Blair’s victory, ending the match with a final score of 5-0.

Junior varsity head coach Leyla Balimtas, who substituted for the varsity coach, believes that the Blazers can bring up the vigor in future games. “[We can improve on] continuing the intensity, and just play our game. I think we’re continuing to improve that each season, and we’re just looking to take one game at a time,” she said.

The Blazers’ next home game will be against Whitman on Monday, Oct. 17 at 6 p.m.