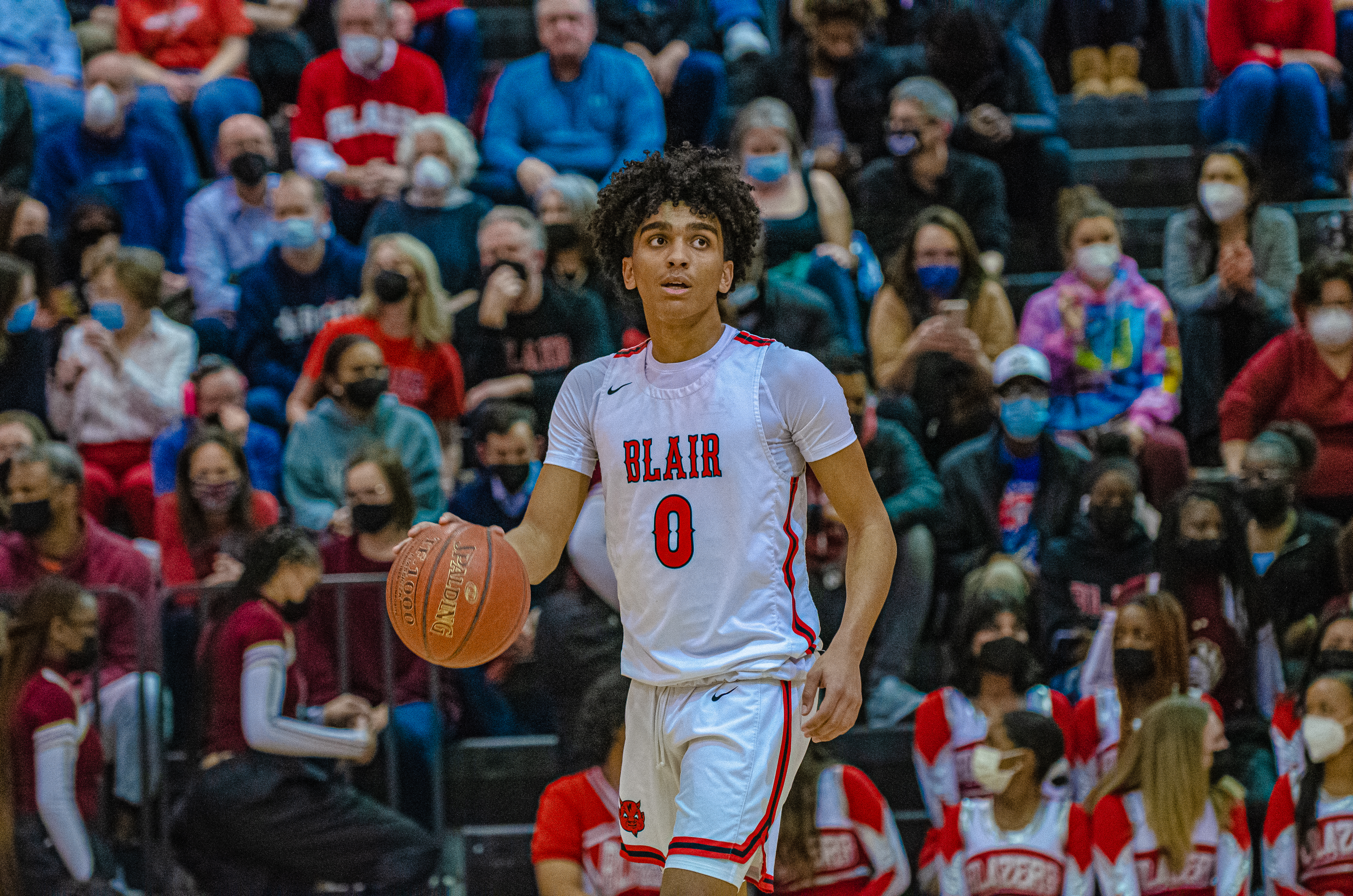 On Feb. 28, the Blair Blazers shut down the Paint Branch Panthers with yet another blowout score of 70-52. This crucial win launched Blair forward in the playoffs, getting them one step closer to the state championship.

Blair came into the game looking confident and hungry for the win. The Panthers seemed unable to contain Blair’s signature sharpshooting; Junior guard Eli Greenberger and Senior forward Gio Moore complimented each other’s threes with some of their own.

Senior center Yann Aubert followed their threes with a high-arcing skyhook shot over the lackluster Panther defense, followed by some turnover trouble by the Blazers. The Panthers made the most of this, converting easy layups to break Blair's scoring run.

Blair headed into the second quarter leading 19-9. The Panthers stepped up their defensive effort with full-court presses on every Blair possession, but Blair still managed to get through their tough defense with more threes from Greenberger and Senior captain Muller Torontow.

Paint Branch began to panic; they weren’t moving the ball enough and were throwing up low-IQ shots. Blair responded to Paint Branch’s hard defense with some of their own. Moore showed off his high vertical by meeting the Panthers at the rim and stuffing a dunk attempt.

The Panthers needed a miracle to combat the highlight-filled offensive performance the Blazers displayed. It seemed that the Blazers were going to get another blowout win under their belt as the half ended with a score of 32-21.

But it seemed like the Panthers might get that miracle in the third quarter, as they began to sink a worrisome number of shots. Though the Blazers took an 11-point lead into the half, Paint Branch immediately silenced the boisterous Blair crowd with a three from the top of the key on their first possession.

They grew louder and louder with every turnover, prompting jeering chants of "Scoreboard! Scoreboard!" from the Blazer fans, drowning out the Panthers as they pointed toward the scoreboard where Blair was still clinging onto a small lead.

Coach Mensah called a timeout with 3:42 remaining; Blair ahead by a few baskets. Whatever he said in those 60 seconds worked. Blair’s defense didn’t allow Paint Branch to make a field goal for the rest of the quarter. Their offense went on a huge run, with a three off a second-chance point from Moore and an electric block and coast-to-coast layup from senior guard Isoiza Emah hyping up the Blair crowd.

Unfortunately, Paint Branch had an immediate answer to Blair’s late third quarter tear. A three from the top of the key just after the quarter began gave a jolt of energy to the Paint Branch crowd. Panther shots kept falling in. With each blow to the Blazers’ small lead, the Paint Branch student section grew louder and louder.

The fourth quarter was as much a battle on the court as it was between the two schools’ fans sitting on opposite ends of the floor. The gym was deafening. The Blazer Ragers employed a massive speaker from which they blasted music during every stoppage of play. Paint Branch screamed at the top of their lungs whenever a Blazer went up for a shot. Shouts of “Scoreboard! Scoreboard!” continued.

But the Blair outdid their opponents on the court and in the bleachers. Greenberger hit three clutch free throws 5:20 in, making the score 50-42 and finally sparking the stagnant Blair offense. Right after Greenberger’s free throws and a defensive stop, Torontow pulled up and nailed a three, hanging his hand in the air for a few extra seconds after the bucket.

Torontow hit another three, and junior guard Jonathan Pang hit another. Blair made shot after shot when they most counted. On the other side of the court, Blair’s defense was absolutely locked in-- blocking shots, intercepting passes, and forcing turnovers.

With1:09 left and the Blazers and their fans nursing a 66-46 lead, Coach Mensah subbed in the bench, drawing some of the loudest cheers of the entire game from the Blair fans.

Sophomore Logan Stillerman sank four free throws, and the crowd was ecstatic. The atmosphere in the gym, from the music to the cheers, was the most electric it had been all season.

As the clock winded down, the Paint Branch players and their once-jubilant fans glumly watched their season come to an end in the first round of the playoffs. As the horn sounded, the Blazers and their fans jumped for joy and screamed, mobbing each other at half court. Players ran into the stands, getting mobbed by the fans. After 30 seconds, the team sprinted into the locker room, basking in the hype of their resounding 70-52 playoff victory.

Blair's next game is tonight at 6pm at home. It will be the Regional finals game against Blake.