25 point leads don't usually come easily, but it certainly seemed like it did during Blair's 79-56 home win against the Richard Montgomery Rockets (4-5) on Jan. 25. Everything about Blair's game, from their snappy passes that consistently folded Richard Montgomery's (RM) defense, to their immaculate three-point shooting highlighted by junior guard Eli Greenberger, and to their suppressive defense that held RM's shooters to just three points in the entire second quarter handed Blair an incredibly hard-fought win.

Immediately after tip-off, it was clear that both teams were going to heavily rely on three-point shooting. Both teams traded blows from beyond the arc as the first quarter dragged on. Senior forward Giovanni Moore and Greenberger led Blair's initial long-range effort.

On the other end of the court, RM players consistently snuck past Blair forwards to grab offensive rebounds and kick the ball back out where their guards could get extra looks from deep. Fortunately, Blair's solid offensive play kept them in the game. At the end of the first quarter, it was knotted up at 16.

Blair head coach Paul Mensah observed Blair's lack of effort on the defensive board and gave an emphatic speech to his players. He said this speech was tied back to his mantra of execution, something that he has been preaching all season. "Earlier, I talked about execution. Execution is how you win. Lack of execution is how you lose… you cannot do that in games if you want to win," he said. When the horn sounded for the start of the second quarter, the Blazers got off the bench and executed.

They continued their steady stream of long-range bombs while also taking advantage of RM's aggressive full-court double team with crisp, well-placed passes. These passes created mismatches and open players in the paint where Blair's towering 6'8" senior center Yann Aubert hooked the ball into the basket over and over again.

On the other side of the ball, the Blazers took Coach Mensah's words to heart and stifled the RM offense. Offensive rebounds were scarce and there were few uncontested shots. At the end of the quarter, Blair only allowed RM to make a layup and a single free throw, and carried a 19-36 lead into the locker room. 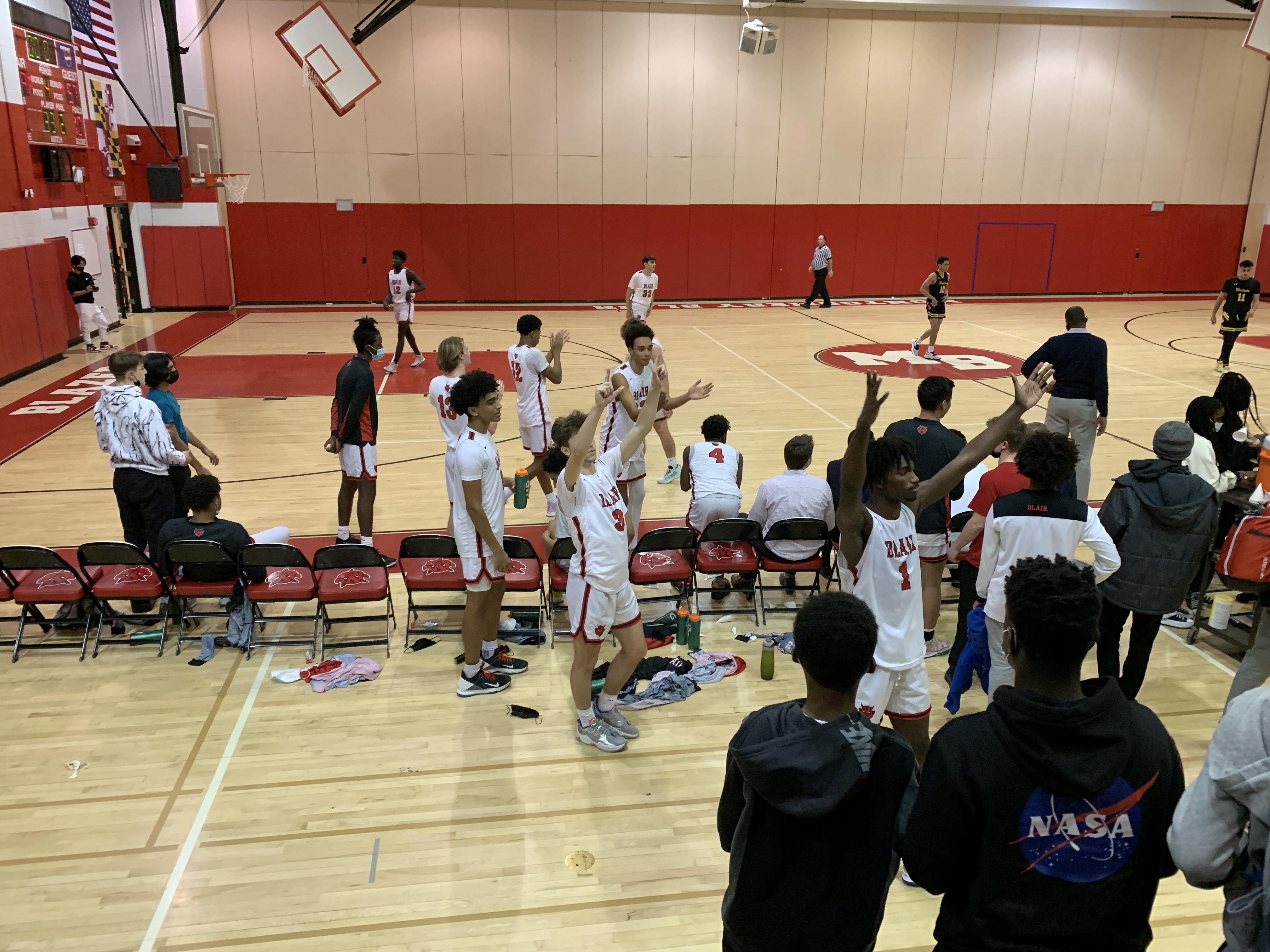 Photo: Blair's bench reacts as the horn sounds to conclude their win against Richard Montgomery.

Photo: Blair's bench reacts as the horn sounds to conclude their win against Richard Montgomery. Photo courtesy of Sachin Parikh.

The Blazers maintained their dominance over the Rockets in the second half. They came out of the locker room with a fresh hustle, resulting in two consecutive turnovers by RM, as their lackluster offense became exposed by Blair’s gleaming defense.

RM put up a respectful effort by responding to Blair’s stellar ball movement with some of their own. They found holes in the Blazer defense for good looks at the basket. They managed to score their first two layups of the half to bring the score to 40-23.

The tenacity in Blair’s play continued all throughout the third quarter. Moore threw down a gravity-defying dunk, showcasing his athleticism, which was immediately followed by senior guard Isoiza Ryan’s continuance of their already notable three-point display.

Moore commented on the effect spectacles like his dunks have on the team’s morale, especially considering the absence of the Blazer student section. “Dunks always get the bench jumping, so if I see the opportunity I try to go for it,” he said.

The Rockets continued their valiant effort with a menacing block and some threes of their own. The third quarter ended at a score of 58-41. They were inching in on the Blazer’s blowout lead and definitely keeping Blair on their toes.

But Blair let the Rockets know they had no chance in the final quarter; Moore unleashed a mid-range barrage along with smooth euro-steps, leaving the Rocket’s defense helpless. The Rockets also put on an offense show of their own, going blow for blow with the Blair offense.

Blair ended the game with a major improvement in their performance off the glass. In the last minute of the game, they managed to score after three consecutive offensive rebounds.

Looking forward to the rest of the season, the team as a whole acknowledged they still have aspects of their game they have to work on. “We were passing the ball really well, but were struggling on the glass, so that’s definitely something we're going to keep working on,” Greenberger stated.

Blair's next home game is next Wednesday, Feb. 2 at 6 p.m. versus Springbrook. It will be the first game since the spike in COVID cases at Blair that spectators can watch. Coach Mensah says the entire team can't wait to have the Blazer faithful pack the stands again. "The Blair fans are awesome. We want you guys back, we miss you. The sooner you can get back, the happier we'll be."