Art and science and murals, oh my!

Blazers create scientific murals on the walls of Blair

You have probably seen the colorful creations painted on the walls in the science wing of the third floor. Blair's Arts and Science Club has been working on these murals for the past three years. Currently, the students are developing their fourth mural, which can be found in the chemistry wing of the top floor at Blair.

The club incorporates both art and science in the unique process of mural-making. "We use art and design to try and communicate scientific topics or ideas that aren't covered in class through our murals," club president senior Michelle Tu explains.

When the club was created, the plan was to dedicate each mural to a major field. "We wanted one for each science; bio, physics, chem and the one that connected all of them, the STEM mural," club co-sponsor and science teacher Megan Hart says. The STEM mural is in the 340s hallway, the Biology mural is in the 350s hallway and the chemistry mural is in progress in chemistry wing. However, last year the club decided to paint a smaller marine biology mural in the stairway on the third floor, which sparked other smaller side projects. For example, some club members are working on ceiling tiles, which will go in classrooms at the teacher's request. "[The] ceiling tiles…are more mini-projects for people that don't have the time commitment to come in every day or want a smaller project," Tu explains.

Prior to painting the mural, club members partake in extensive brainstorming within the overall science subject. "We pick out topics that are interesting and have aspects that we can transform into art," Tu explains. They then begin an intensive researching phase in which they try to learn as much about the science as they can. "We have the responsibility to paint scientific processes that are accurate and based on factual information," she says. After that, they create a sketch on paper, paint the background colors on the wall and finally start working on the details of the mural. According to Tu, this is the most time-consuming part. She adds that the process is very similar to that of a research project. "You pick a topic that you think is interesting and you go online to search more about it and then you get to create something bigger," Tu says. 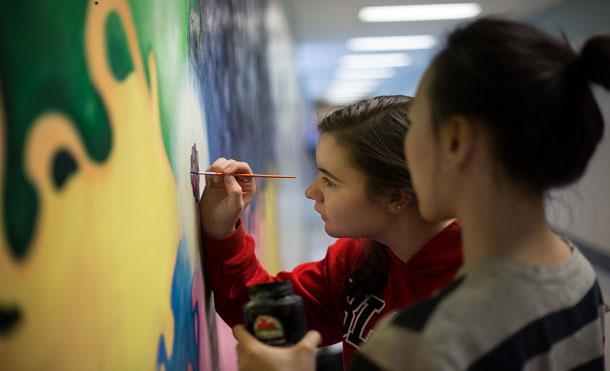 Tu notes that the hardest part of the process is finding a balance between getting the science right and creating the aesthetics of the mural. "We want to be as accurate as possible especially with all the science teachers around, but we also want to draw people in," she says. She adds that when students first walk by, they see only the visuals, but the club wants Blazers to notice the science as well. "We want people to be drawn in by the shapes and the color, but then really stop and ask questions about the science," she explains.

In December, the Arts and Science Club began painting a mural in the chemistry wing which they plan on finishing by the end of the school year. The mural is divided into 5 sections: medicine, food, fireworks, polymers and space. "The mural is about how chemistry applies to things we see in our lives," Tu states.

In addition to providing nutritional nourishment to the club members, Hart and her co-sponsor, art teacher Amanda Wall, act as mentors for the group. "I help more with scientific aspects of the murals like the brainstorming and researching phases, Ms. Wall helps with the artistic side of the murals," Hart says.

The club consists of about twelve Blair students from all four grades. The members meet at least three days per week until 4:30 or later. Club member senior Noelle Mason enjoys being able to spend that time working with her fellow club members. "It's fun to spend time with so many people who are all working towards a common goal," she explains.

Hart encourages students to join if they have any sort of interest in art. "If they are artistic, enjoy doing art or want to get into doing art then they should definitely join Arts and Science Club," she says. Both Hart and Tu agree that students should also be interested in science as well.

Tu enjoys being a part of the club because in addition to being able to leave her legacy on the walls of Blair, she gets to indulge in two of her interests. "I love science because it is always changing, so there is always something new thing to learn, but I've always had art as a hobby and that will stay with me for life," she says.