The latest installment of the Marvel Cinematic Universe does not live up to the hype.

After the shocking events of Avengers: Infinity War, the last thing viewers expect is an upbeat cheery film about Marvel's favorite burglar. But two years after the events of Captain America: Civil War, the gang is back and better than ever.

Well, not exactly. Scott Lang (Paul Rudd) also-known-as Ant-Man is serving two years of house arrest after fighting alongside Captain America in Civil War. By fighting, he breaks the Geneva Accords which say that the Avengers will be controlled by the government. Lang has had no contact with the creators of the Ant Man suit: Hank Pym (Michael Douglas) and Hope Van Dyne aka Wasp (Evangeline Lilly). The Pym's are furious with Lang for getting caught with the Ant-Man suit in the last movie. But once again, they need his help to take down a new villain.

The plot centers around the quantum realm, a new dimension discovered by Pym's wife Janet Van Dyne (Michelle Pfiefer). Janet has been trapped in the quantum realm for almost twenty years but now there is hope of her discovery. Hank and Hope believe that they can find Janet, and bring her back to Earth. Along the way, they run into a new villain Ghost (Hannah John-Kamen). She was exposed to quantum energy as a child and is now on a quest to avenge the death of her father, a former associate of Hank's.

After the introduction of Thanos, Marvel's biggest villain, in Infinity War, Ghost seems almost like an afterthought in this film. Her story is generic and her motives are confusing. Typically, a good action movie has a good villain. A sequel should always exceed the bar set by the first movie, especially in the form of a villian. Ghost falls short of the status quo set by the villains in previous Marvel movies.

The main issue with Ant-Man and the Wasp is the plot. At the beginning, it is very confusing as is never explicitly revealed how Scott was put in house arrest or why he hasn't been in touch with Hope and Hank. The producers should have made the beginning shorter, getting right into the thick of the action. It is nice to see a new shrinking character in the Wasp, who can fly and blast people in mid-air. She gets to demonstrate her powers in several fight scenes throughout the movie. Despite the action, the ending falls flat. There is nothing which draws the audience in and nothing which makes it memorable to the viewer when they leave the theatre. 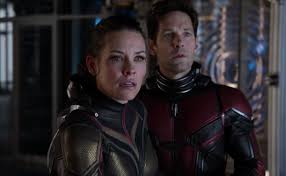 Ant Man and the Wasp

Photo: Evangeline Lilly and Paul Rudd reprise their roles as Hope Van Dyne and Scott Lang in Ant Man and the Wasp.

Special effects vendor Method Studios did a fantastic job turning the quantum realm into a beautiful world flowing with vibrant colors. When a character enters it, the whole tone of the film changes from cherry to mysterious and creepy. It's clear that a lot of time was spent developing the realm and it paid off. The soundtrack is nothing special but pairs well with the upbeat theme of the movie.

Ant Man and the Wasp does have one thing going for it: comedy. This is definitely one of the funniest films Marvel has made to date. Luis (Michael Peña) returns with his blabbering monologues, and Scott continually suffers bad luck with his insect companions. As Scott, Paul Rudd is a natural comedian and he shows it in this film.

All in all, Ant Man and the Wasp is a good movie to see if you want some fun loving characters who create hilarious moments. Infinity War left the audience wanting more big villans and more compelling storylines. This is just not a good movie to follow a once in a decade thriller like that. In the grand scheme of the Marvel Universe, Ant Man and the Wasp just isn't up to par.

Ant Man and the Wasp is playing at all theatres in the DMV area including the Regal Majestic Stadium (Silver Spring), AMC Wheaton, Landmark Bethesda, and Arclight Montgomery Mall (Bethesda). It is rated PG-13 for some sci-fi action violence.