Adele’s new single is “Easy On” the ears

The singer releases “Easy On Me,” an emotional ballad that precedes her upcoming album, 30. 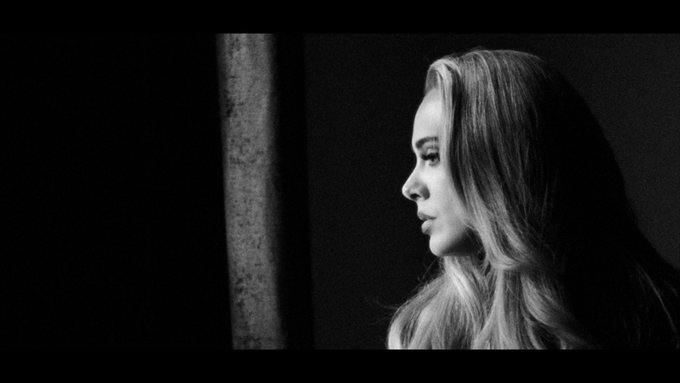 Photo: Adele eases back into the music industry with a powerful single about her divorce (image courtesy of Adele's Twitter).

Photo: Adele eases back into the music industry with a powerful single about her divorce (image courtesy of Adele's Twitter).

After a six-year musical hiatus, Adele is back with a new single, “Easy On Me.” Released on Friday, Oct. 15, the single is a teaser for her upcoming album 30, set to release on Nov. 19. The powerful song delves into Adele’s split from her ex-husband, her message to her son and how she will move forward in life.

“Easy On Me” is exactly what you would imagine when you think of Adele’s music – a slow and melodic ballad, with the deep ups and downs of her smooth yet powerful voice. To further accentuate Adele’s singing, the song’s backtrack consists exclusively of a repetitive major piano theme.

While the song starts out relatively quiet in the verse, Adele quickly builds up her vocal power in the chorus, just as she does in most of her raw and sorrowful balladesque songs (i.e.“Someone Like You” and “Chasing Pavements”). However, she also switches to falsetto as she sings, “so go easy on me,” revealing a more raw and vulnerable side as she fades out of each chorus.

Even the music video for “Easy On Me” feels extremely on brand for Adele. Just like the iconic music video for “Hello,” the music video starts in black and white, as the singer moves out of her old house and drives away. Halfway through, the video changes to color, as Adele belts out the lyrics in a messy and turbulent room with wind blowing through her hair.

For fans, the release signifies Adele’s long-awaited return to the music industry. “Easy On Me” might not offer anything particularly new in terms of the song style itself, but it’s the familiarity of Adele’s powerful lyrics and melodically deep voice that brings comfort and joy to listeners, especially after six years of no new music.

The song’s lyrics have to do with Adele’s split from her ex-husband Simon Konecki back in 2019, but isn’t meant to be solely a “divorce ballad” – she wants it to be a song dedicated to her nine-year-old son, Angelo as he grapples with his parents’ split.

In an interview with Vogue, Adele explains that “Easy On Me” (along with the rest of the upcoming album) is meant to help answer difficult questions Angelo has. “I just felt like I wanted to explain to him, through this record… why I voluntarily chose to dismantle his entire life in the pursuit of my own happiness,” she says.

The lyrics are a plea for empathy, especially in the chorus: “Go easy on me, baby / I was still a child / Didn’t get the chance to / Feel the world around me.” As her son grows, she hopes that he will gradually understand how hard it has been at this tenuous time in her life, and shows her vulnerability despite her vocal power.

We also see more references to her son and Konecki in the second verse, as Adele’s voice tugs on listener’s heartstrings: “I changed who I was to put you both first / But now I give up.” This is also the moment in the music video when the scene changes to color, marking the moment when Adele lets go of her past and fully embraces her future.

The bridge is the peak of Adele’s vulnerability in the song: “I had good intentions / And the highest hopes / But I know right now / It probably doesn't even show.” In spite of how Adele might try to explain her actions or choices, she knows that it’s hard for her son to see how hard she tried to hold on at the end of the day.

Still, Adele understands that she has to keep moving forward. 30 is focused heavily on turning over a new chapter in Adele’s life, as well as prioritizing herself. “I feel like this album is self-destruction, then self-reflection and then sort of self-redemption. But I feel ready. I really want people to hear my side of the story this time,” she continues in her interview with Vogue.

Furthermore, for fans who waited for another album throughout all this time, the single and upcoming album are also a way to reflect on their own past six years. Adele’s albums truly encapsulate what it’s like to grow and change, which is fitting for her album names that align with her age.

With “Easy On Me,” Adele re-emerges into the music industry. While she might be coming from a fragile point in life, she is also entering a new stage of her life, and we wait excitedly for the inspiring and powerful messages that 30 will undoubtedly hold when it releases on Nov. 19.