A 'Strange' journey through the multiverse

Warning: This review contains spoilers for "​​Doctor Strange in the Multiverse of Madness."

Released on May 6, "Doctor Strange in the Multiverse of Madness" (directed by Sam Raimi) follows its titular character, played by Benedict Cumberbatch, on a fast-paced adventure as he strives to once again save the world. Well, the multiverse this time.

Following the events of "Avengers: Endgame" and "Spider-Man: No Way Home," the movie begins with Dr. Strange attending his ex-lover's, Christine Palmer's (Rachel McAdams), wedding. Immediately after the ceremony is over, a monster wreaks havoc on the streets of New York, forcing the city's resident sorcerer to defeat it.

This monster, as Dr. Strange finds out later, is surprisingly not destroying the city for fun. Instead, it's seeking to kidnap a newly introduced character, America Chavis (Xochitl Gomez), who can jump through the multiverse with star-shaped portals when she's extremely scared.

After figuring out that witchcraft is involved in the attempted kidnapping, Dr. Strange seeks out his good friend Wanda Maximoff, aka the Scarlet Witch, for guidance, hoping to help America get back home safely. In a twist of events, Wanda is revealed to be the one behind the kidnapping, but her goal is a seemingly wholesome one - she just wants to be reunited with her sons with the use of America's powers. However, she will stop at nothing to get what she wants. 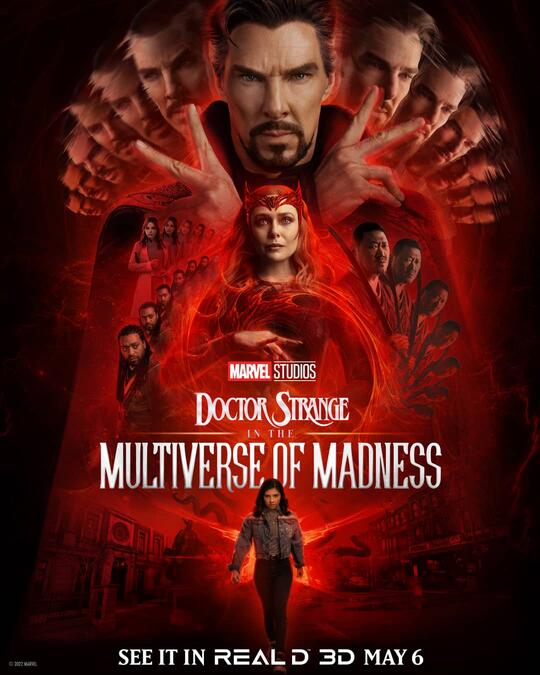 Photo: The newest Marvel movie is a must-watch.

Photo: The newest Marvel movie is a must-watch. Photo courtesy of Marvel.

This clash between two of Marvel's most beloved main characters has been highly anticipated in the MCU. Cumberbatch and Olsen pull it off wonderfully, Olsen even showing her ability to adapt to movie genres - in this case, horror. This genre doesn't normally go hand in hand with Marvel movies, but Raimi is known for his horror movies, such as "Umma" or "Evil Dead." His experience with the genre stands out in the movie as Olsen brings a wicked Scarlet Witch to life with trademark creepy scenes, a favorite being Wanda's twisting body as she climbs through a mirror.

The movie further succeeds in conveying Wanda's tunnel vision when it comes to her family, tugging at the viewers' heartstrings with dramatic music and dark lighting. However, the emotion is truly shown in Olsen's excellent acting. Down to the last detail of shuddering breaths, Olsen nails her lines, making sure that the viewers are holding their breath as they watch.

Cumberbatch is similarly exceptional in his role, playing the part of an arrogant hero well. His acting especially shows in Dr. Strange's attitude towards his loved ones. While he pretends to be indifferent towards America and Christine, Dr. Strange's concerned actions show otherwise as he is ready to sacrifice even himself before he lets harm fall upon the two women.

Overall, one of the best scenes in the movie comes during Dr. Strange's fight with himself - well, his other self from another universe. The fight scene involves music notes as weapons; both sorcerors enchant sheets of music to throw half notes and quarter notes at each other. This use of magic is exciting, but what really brings the scene together is the music in the background. Symphonies build up in suspense as each Dr. Strange struggles to pull themselves together, and each sheet of music used triggers a new song, emphasizing the intensity of the scene.

The only fault was Wanda's unhappy ending as she ultimately makes the right decision with an immense sacrifice. Let's be honest, she deserves a lot more than what she got. Regardless, with appearances from the infamous Wong (Benedict Wong) and Dr. Strange's former enemy, Mordo (Chiwetel Ejiofor), the cast portrays an unforgettable adventure. For fans of Marvel or just superheroes in general, this is a highly recommended watch. Happy watching!

"Doctor Strange in the Multiverse of Madness" is rated PG-13 for intense sequences of violence and action, frightening images and some language. It is now showing in theaters, including Regal Cinemas and AMC Theatres.

Tharindi Jayatilake. Hey, I'm Tharindi [she/her] :D In my free time, you can find me dancing or listening to music. More »